The National Stock Exchange (NSE), on August 01, 2018, removed nine stocks from the ASM (Additional Surveillance Measure list, a new category formed by SEBI to check market manipulation) resulting in a continued upward momentum on the selected counters. However, even before the circular was issued, these nine stocks had already witnessed a huge spike in their respective stock price, thus raising a question whether people correctly anticipated this move or if they were already aware of it?

Following is an illustration of stock performance and delivery volume comparison of these nine stocks before they were removed from the ASM Framework: 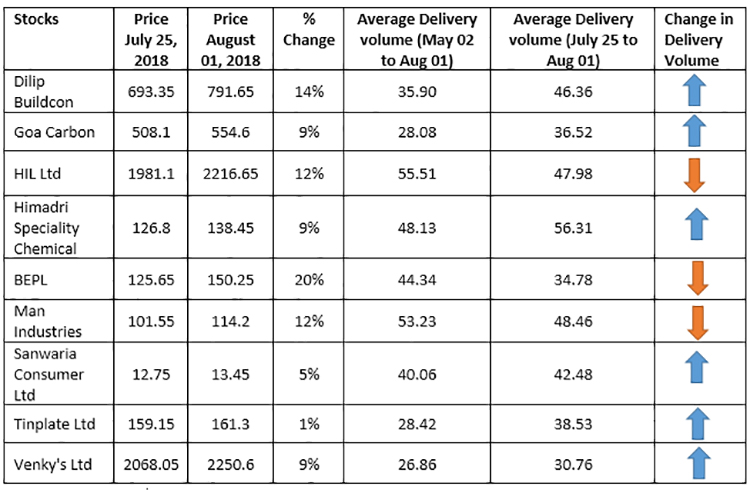 As can be seen in the above table, all nine stocks saw an average spike of ~10% in their underlying stock price in the last 7 trading sessions in comparison to their quarterly average. Of these, six stocks saw an average increase of 1.22x in delivery volumes. Rising volumes, along with a rise in the underlying asset price, indicate a build-up of long positions, hinting that traders could have either anticipated this move or were already aware of it.

A similar activity was witnessed before the ASM list of 37 stocks was first announced on May 31, 2018; heavy intraday short selling was observed in three stocks on the list, namely Bombay Dyeing, Fineotex Chemical, and Dilip Buildcon, ahead of the issuance of the circular, resulting into an average intraday correction of ~10% in these stocks. This clearly suggests that traders either anticipated the move or were precognizant about the issuance of such a circular.


How do the stocks move out of the ASM framework?

Stocks in the ASM framework are reviewed every two months for applicability of ASM Framework.

The review is based on the following criteria:

1)      Stocks having PE Ratio less than 10x shall be moved out of the ASM framework and the close price shall become the base price for subsequent reviews.

2)      Stocks having PE ratio less than PE ratio of Nifty 500 Index, which is currently hovering at ~32x, shall be moved out of the ASM framework in case such stocks do not meet the entry criteria.

3)      Stocks having PE ratio less than 2x PE ratio of Nifty 500 Index shall continue to remain in the ASM; however, such scrips shall be moved out of Trade for Trade segment.

Thus, from the list of nine stocks, the following three did match the first criteria mentioned above and were removed from the ASM list.