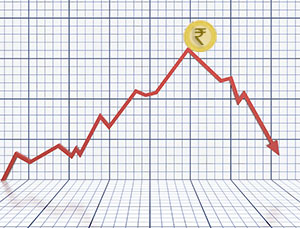 The Indian currency continued its freefall against the US dollar, slumping to a fresh record low after latest macroeconomic data showed that the country’s trade deficit widened to its highest in over five years.

Government data released on Tuesday showed that India’s July trade deficit widened the most in more than five years, worsening the outlook for the rupee that hit a record low after the Turkish lira-led sell-off in emerging-market currencies.

The trade deficit gap between Indian exports and imports was at $18bn in July, fanned by a higher oil import bill, data released by the Indian Commerce Ministry showed on Tuesday. That compares with the $15.7bn median estimate in a Bloomberg survey of 24 economists and $16.6bn in June.

While a weaker rupee is positive for exports, it poses an inflation risk for a nation that imports more than 80% of its crude-oil needs and adds to the stress on the current-account balance.

The continued fall in the rupee has threatened to disturb the painstakingly attained goldilocks zone that many felt the Indian economy was at a couple of months back.

Goldilocks economy derives its name from the children’s story “Goldilocks and the Three bears”. A Goldilocks economy is broadly characterized as one which is neither 'hot' enough to fuel higher prices nor 'cold' enough to bring about a recession. It essentially features the conditions of lower unemployment rate, increasing asset prices, low consumer price inflation, and sustained economic growth.

The domestic currency has fallen nearly 10% this year, making it the worst-performing currency in Asia. The free fall on the rupee in recent times could pose a threat to the Reserve Bank of India's function of keeping inflation under check.

The fragile condition of the domestic currency was worsened by the volatility and risk averseness prevailing in the global markets, which continues to be roiled by the downward spiral in the Turkish lira.

However, the Turkish lira rallied against the dollar on Thursday after Qatar pledged to invest US$15bn in the country. This proved to be a saving grace for Turkey, a week after a US directive hiked tariffs on steel imported from Turkey and pushed the country into a currency crisis. The funds would be used to shore up the Eurasian country's banking system.

Today, the US ruled out removing the steel tariffs against Turkey even if the US pastor jailed in Ankara is freed. Speaking to reporters in Washington, White House spokeswoman Sarah Sanders made it clear that the United States had no plan to remove the steel tariffs if Brunson were released though it could remove those imposed on two, senior Turkish officials.

Earlier this week, the Turkish lira sank to a new record low against the dollar after President Donald Trump, on Friday, doubled tariffs on Turkish steel and aluminum imports to 20% and 50%, respectively. The lira weakened past 7.23/$1 to a new record low amid thin volume before paring losses after the nation’s Banking Regulation and Supervision Agency stepped in to limit swap transactions on the battered currency.

In direct retaliation to the latest US tariffs, Turkey President Recep Tayyip Erdoğan imposed higher duties on US imports, including alcohol, cars, and tobacco.

The Turkish currency has slumped nearly 50% this year as pressure from US sanctions and a new constitutional order that concentrates power in the hands of Turkey President Erdoğan exacerbated the Eurasian country’s already fragile economy.

The linchpin of the disaster remains Turkey's current account deficit (CAD), where it currently requires external financing of about $218bn. According to reports, the country's corporates will have to repay or roll over $66bn in foreign currency loans. The foreign loans with Turkish banks stand at a staggering $76bn.

Turkey has, in recent years, been one of the fastest-growing economies in the world, even outperforming China and India last year. In the second quarter of 2018, the country reported a 7.22% growth in its gross domestic product (GDP). However, this growth was fuelled by foreign currency debt. This borrowing-fuelled consumption and spending have led to the fiscal and current account deficit.

The country's foreign currency debt now stands at more than 50% of its GDP, according to estimates of the International Monetary Fund.
Meanwhile, inflation has been racking up, at 15.9% in July 2018, exceeding the Turkish central bank’s target of 5%. Raising interest rates in this situation would have helped cool down surging consumer prices. However, President Erdoğan has been in favor of lower interest rates to drive growth. And given the new constitutional order which allows him significant influence on the central bank, interest rates are unlikely to rise up soon.

However, there were also political reasons for the slide in the currency. Previously, the US imposed sanctions against Turkey's Minister of Justice Abdulhamit Gül and Minister of Interior Süleyman Soylu for participating in the detention of US pastor Andrew Brunson, who is suspected of being connected to the Gulen movement.

Washington believes that he was jailed unlawfully. Ankara has scolded the US sanctions and promised to freeze US Justice and Interior Secretaries' assets in Turkey. Brunson was detained in 2016 on suspicion of links to the movement founded by Islamic cleric Fethullah Gulen, who Ankara holds responsible for the failed coup attempt that same year.

--with inputs from news agencies