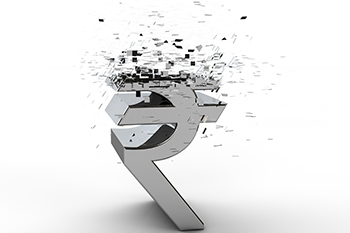 The Indian rupee tumbled to a record low against the US dollar as the emerging market currency crisis continued to deepen amid fears to a likely contagion from the Turkish lira downward spiral. The rupee was trading at 69.46/$1, down by 63paise against the US dollar. The home currency opened 65paise lower to open at Rs69.48/$1 compared to Friday’s closing price of Rs68.83/$1. It plummeted to a record low of Rs69.62/$1 in intra-day trades.

The Turkish lira sank to a new record low against the dollar, marking its fourth straight day of drop against the dollar after President Donald Trump doubled tariffs on Turkish steel and aluminium imports. The lira weakened past 7.23/$1 to a new record low amid thin volume before paring losses after the nation’s Banking Regulation and Supervision Agency stepped in to limit swap transactions on the battered currency.
On Friday, US President Donald Trump authorized a doubling of metal tariffs already in place against imports from Turkey, with duties on aluminium and steel amounting to 20% and 50% respectively.

The Turkish currency has slumped nearly 50% this year as pressure from US sanctions and a new constitutional order that concentrates power in the hands of Turkey President Recep Tayyip Erdoğan exacerbated the Eurasian country’s already fragile economy.
The linchpin of the disaster remains Turkey's current account deficit (CAD), where it currently requires external financing of about $218bn. According to reports, the Eurasian country's corporates will have to repay or roll over $66bn in foreign currency loans. The foreign loans with Turkish banks stand at a staggering $76bn.

Turkey has in recent years been one of the fastest-growing economies in the world, even outperforming China and India last year. In the second quarter of 2018, the country reported 7.22% growth in its gross domestic product (GDP). However, this growth was fuelled by foreign currency debt. This borrowing fuelled consumption and spending, which led to fiscal and current account deficit. The country's foreign currency debt now stands at more than 50% of its GDP, according to estimates by the International Monetary Fund.

Meanwhile, inflation has been racking up, at 16% in July 2018, exceeding the central bank’s target of 5%. Raising interest rates in this situation would have helped cool down surging consumer prices. However, President Erdoğan has been in favour of lower interest rates to drive growth. And given the new constitutional order which allows him significant influence on the central bank , interest rates are unlikely to rise up soon.

However, there are also political reasons for the slide in the currency. Previously, the US imposed sanctions against Turkey's Minister of Justice, Abdulhamit Gul and Minister of Interior, Suleyman Soylu for participating in the detention of US pastor Andrew Brunson who is suspected of being connected to the Gulen movement.

Washington believes that he was jailed unlawfully. Ankara has scolded the US sanctions and promised to freeze US Justice and Interior Secretaries' assets in Turkey. Brunson was detained in 2016 on suspicion of links to the movement founded by Islamic cleric Fethullah Gulen, who Ankara holds responsible for the failed coup attempt that same year.

Given the tumble in lira is multifaceted, caused not only by the widening twin deficits but also political turmoil, amid an aggressive stand-off against the US, the crisis is unlikely to get resolved soon. And EM currencies are likely to be caught in the cross-fire.