Read Full Story
Reliance Industries Ltd’s (RIL) stock price has almost doubled over the last two years with its market cap crossing $100bn mark last month. This outstanding return is majorly a reflection of robust performance of its petrochemical and retail segments and fresh entry into telecom segment. Continued growth in these segments is expected to lead to higher value creation for the investors. 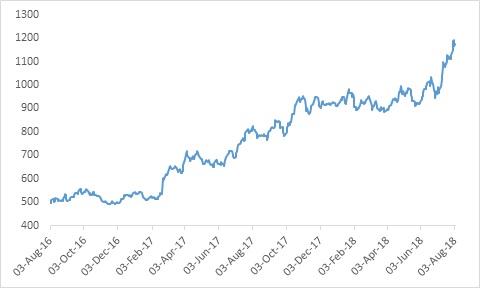 Here are the contributors to the outstanding performance of Reliance Industries:

Commissioning and stabilization of Refinery Off-Gas Cracker (ROGC)
Improved performance of petrochemical segment was a result of commissioning and stabilization of Refinery Off-Gas Cracker (ROGC) and improved demand dynamics. RIL commissioned the ROGC project along with downstream facilities in FY18. Company’s total ethylene capacity now stands at 3.6 MMTPA. Ethylene is the basic building block for large number of petrochemicals and is also quoted as king of chemicals. RIL is the only producer of Low Density Polyethylene (LDPE) in India, and saw increase in market share from 35% to 53% post commissioning of ROGC.

Reliance Retail adds another feather to the cap
Reliance Retail segment also saw significant traction with robust revenue CAGR of ~81% over FY16-18 and EBIT CAGR of ~102% over the same period. Reliance Retail added 221 stores and 3,736 Jio Points stores during FY18 and as of Q1FY19 operates 18.6 mn sq. ft. of retail space, the largest footprint among any organised retailer in India. Revenue/sq.ft improved from ~Rs5,218 in Q1FY17 to ~Rs13,919 in Q1FY19.

Jio: From newbie to market leader
Over the past 15 months, Reliance Jio has solidified its position from being primarily an urban telecom operator to making strong in roads pan India. Jio has been able to grow through its relentless approach of offering value to users at a highly competitive price. This has been in the form of bundled data plans, which offered 4G data at very low rates as well as through growing rural subscribers base via the Jio phone.
Market share for Jio has grown from 5.2% to 25.4% from Q1FY18 to Q1FY19, with a net subscriber addition of 76mn. What has been impressive about this growth has been that the ARPU of Jio has declined by 13.5% from Rs156 per user in Q2FY18 to Rs135 per user in Q1FY19. Meanwhile, over the same period ARPU for Idea Cellular and Bharti Airtel declined by 24% and 28% respectively. As a result of these efforts, Jio earned a revenue of Rs20,154cr with an EBITDA margin of 33.4% and a net profit of Rs723cr.

Jio ARPU has remained resilient, while ARPU of other operators has shrunk significantly

Jio growth opportunities
At present, India has ~450mn internet users. However, internet penetration still stands at ~34%. The gap is especially wide in rural India, where ~150mn users still do not use the internet. In order to bridge this gap and enable affordable high speed mobile data, Jio launched the JioPhone. The JioPhone has proved to be a hit in rural markets, with Jio increasing its rural user base in Q1FY19. The company has recently launched an upgrade to the JioPhone, the JioPhone 2. Along with this new launch, the company has also come up with the monsoon hungama offer, which is an exchange offer to encourage users to migrate to Jio.
Reliance Jio has also announced the launch of Jio GigaFiber, a fibre-to-the-home (FTTH) broadband service. The service aims to provide speed of up to 1GBps, which will provide home Wi-Fi network to the user’s home or office and also allow for access to digital TV. Jio GigaFiber is expected to roll out to 1,100 cities simultaneously.