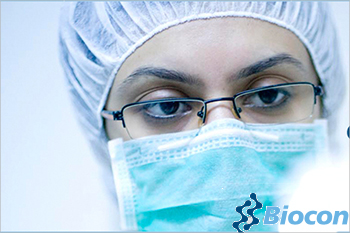 As the Indian pharma sector tries to dust off its clothes, many shares in the sector have started to move in the positive direction. Shares of Sun Pharma and Torrent Pharma zoomed up 29% each in the past three months.

Shares of Dr Reddy’s Lab and Lupin, both of which have outstanding warning letters on their manufacturing facilities, have also gone up by over 15% each over the past three months.

On the other hand, shares of Biocon have lost 7.5% over the same period. From the peak of Rs695, the company's shares have tanked ~15% which is somewhat surprising. Should you continue to hold Biocon? Let’s find out.

Research businesss in secular growth trend
Biocon’s largest business is to provide research services as an outsourcing partner to clients through its subsidiary Syngene International. As global pharma companies are in pressure due to the patent expiries and pricing pressure, they are looking for ways to reduce their expenditure, one of the options they tend to explore is R&D outsourcing. This includes outsourcing drug discovery/development as well as clinical trials. Syngene largely conducts discovery/development work in both chemical and biosocial segments.

The research business requires frequent capex, and Biocon has not fallen short of money in this business. The balance sheet size of Syngene increased ~8x from Rs400cr in FY10 to Rs3,189cr in FY18. The company is currently setting up a new commercial API manufacturing facility in Mangalore, which is scheduled to be operational by FY20E. Realizing that biologics will be the global growth driver in pharmaceuticals, the company has also made several investments in biologics and has acquired/set-up capacities such as a viral testing centre, a biologic manufacturing plant, bioinformatics, etc.

Commercial manufacturing will become a key growth driver for Syngene given that small biotech companies tend to outsource their manufacturing to the most compliant players. We believe that Syngene can easily grow at 20%+ secular CAGR over the next decade. The current ROE of 17-18% would increase to 20%+ as the investments mature. We reckon that Syngene is a proxy play in the innovative drug research, which is of utmost importance to large pharma companies.

From the deal with Mylan, Fulphila, i.e., Pegfilgrastim Biosimilar has been launched in the US. Trastuzumab Biosimilar has been approved in the US and is awaiting commercialization in CY18E. Insulin Glargine has been approved in Europe and is under review in the US. Trastuzumab/Pegfilgrastim Biosimilars are under review in Europe. Biocon/Mylan have also accelerated the Adalimumab (Humira) Biosimilar development through an in-licensing deal with Fujifilm Kyowa Kirin Biologics and Etanercept (Enbrel) Biosimilar development via an in-licensing deal with Lupin.
Biocon’s matured Biosimilar pipeline
(Source - Company, IIFL research)
Multi-fold revenue growth in Biologics business
Biocon’s revenue from the Biosimilars business is expected to grow multifold in the coming years. In FY18, Biocon’s sales form biologics rose 10% yoy to Rs770cr; however, in Q1FY19, biologics revenue grew 47% to Rs241cr. Note that the sales from Pegfilgrastim Biosimilar will be recorded in Q2FY19E, and hence, growth will be much higher in the rest of FY19E quarters. The company has guided that the FY19E biologic sales will be ~$200mn (~Rs1,360cr) on the back of improving biologics sales in developing countries and Fulfila launch. Note that Insulin Glargine and Trastuzumab are yet to be commercialized, and the company expects much of the FY19E growth to be from emerging markets.
Inspired by the success that the collaboration of Biocon and Mylan has seen, these companies have extended this collaboration to add two more Biosimilars in the pipeline : 1) Glargine 300 units/mL - sold by Sanofi as Toujeo; global sales of $900mn in 2017 2) Pertuzumab - sold by Roche as Perjeta; global sales of $2.2bn in 2017. Additionally, Biocon has also begun work to develop new-generation Biosimilars with Sandoz.
The Biosimilars opportunity is expected to drive Biocon’s PAT ~3x over FY18-20E. The launch of other Biosimilars with Mylan and Sandoz will lead to secular growth in Biocon’s biologics business for the next decade. The company has already hinted $1bn sales from its biologics business and a separate listing of this business in 2025.

Clear facilities, regulatory issues are now behind Biocon
Facility-wise, Biocon is fully compliant with regulatory bodies. Earlier this year, USFDA had issued some observations at its Bengaluru sterile Drug Product manufacturing facility, however, it received an EIR from USFDA and the EU GMP certification.
In August 2017, Biocon withdrew its two Biosimilars Trastuzumab and Pegfilgrastim from Europe due to regulatory non-compliance with EMA. In November 2017, it resubmitted both the Biosimilars with the EMA and is awaiting review. This plant has received USFDA and EMA clearance in July 2018. Both the Biosimilars have received USFDA approval, and hence, we believe that both are likely to get EMA approval as well.

The company has built a brand new insulin manufacturing facility in Malaysia, and with its partner Mylan, is seeking site change from Bengaluru to Malaysia to manufacture Insulin Glargine. This facility has an outstanding form 483, and the company is responding to USFDA in this regard. Form 483, however, does not impact the company as the product is under a 30-month stay until March 2020. Moreover, this plant has received clearance from European and Australian agencies; hence, we are also positive on USFDA's clearance for this site.

How the Biosimilars market has developed in the US – Remicade case study
The Biosimilars market is currently in nascent stages with only a few Biosimilars been commercialized. A host of Biosimilars, however, will be launched over the next decade. The question could arise from the ramp-up of the Biosimilars market.
To answer this, we have checked the ramp-up of Pfizer’s Biosimilars sales since Q1CY16. We have observed that Pfizer’s sales from all Biosimilar products grew from $66mn in Q1CY16 to $188mn in Q2CY18 or from $319mn in CY16 to $531mn in CY17, and possibly, $700mn+ in CY18E.
Among all Biosimilars, Remicade (infliximab - Innovator J&J) is the largest in Pfizer’s portfolio and is sold under two brands, i.e., Inflectra and Remsima, since 2016. The entry of Biosimilars led to a 9% yoy decline in the J&J’s Remicade revenue from $6.9bn in 2016 to $6.3bn in 2017. Sales of Inflectra and Remsima for Pfizer jumped 76% yoy from $172 in H1CY17 to $303mn in H1CY18. Another Remicade Biosimilar Renflexis was launched by Merck/Samsung Bioepis in 2017 in the US despite which Pfizer did well, and there is scope to believe that Renflexis also did well. This is a very encouraging story for Biocon’s shareholders to understand the potential of the Biosimilars business. What should investors do?
Biocon has a known track record in Biosimilar development/regulatory approvals. Its commercial partnership will help in commercializing these big/complex products successfully in the developed markets. We believe that Biocon is set for a clear trajectory of growth over the next decade due to the Biosimilars and research businesses.
We opine that Biosimilars will remain a niche area in pharma owing to the hegemony of a handful of players and due to product complexity and being less prone to competition compared to generics. These companies in Biosimilars would be reaping huge benefits for a relatively long period.

Thus, we believe that Biocon remains a top pick in the pharma sector. There will be some ups and downs due to the regulatory issues or competition; however, one needs to stick with the company to reap long-term benefits.