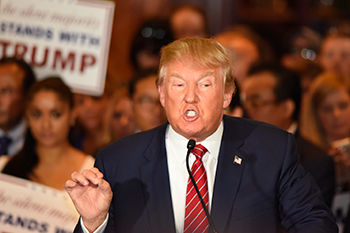 President Donald Trump accused China and the European Union of manipulating their currencies as he tries to wrestle concessions from two of the US’s largest trade partners.

“I think China’s manipulating their currency, absolutely. And I think the euro is being manipulated also,” Trump said in an interview with Reuters published on Monday.

The president’s accusation, presented without explanation or substantiation in the Reuters report, conflicts with the findings of his own administration. The Treasury Department stopped short of naming China, the EU, or any other country as a currency manipulator in April, in a semi-annual report on the foreign-exchange policy. The US hasn’t officially accused another country of currency manipulation since 1994.

The dollar extended its drop to trade at the day’s low as measured by the Bloomberg Dollar Spot Index while the euro rose to its highest level in more than a week at $1.1481. The dollar was already under pressure after Bloomberg News reported earlier that Trump complained about interest rate hikes under Federal Reserve Chairman Jerome Powell.

In the April report, Treasury dialed up its criticism of China, citing lack of progress in rectifying its trade imbalance. The department said that China’s “disproportionate share of the overall US trade deficit” required “enhanced analysis” of whether it’s a manipulator, along with five other countries. A designation requires the US to engage in expedited negotiations with the country.

China’s stock market has suffered declines and the yuan has been on a losing streak for more than a month. Chinese authorities, bracing for economic fallout, have introduced measures to support growth ranging from shifting toward a more accommodative monetary policy to boosting fiscal spending.

“There is little evidence of more than scant Chinese foreign exchange market intervention,” Mark Sobel, a former US Treasury official who worked at the department for nearly four decades, wrote in a column published Monday by a London-based think tank, the Official Monetary and Financial Institutions Forum. He cited a lack of evidence in China’s foreign reserve holdings data and other measures.

Trump also said the Federal Reserve should help him in his trade disputes with China, the EU, and other nations, asserting that other central banks are assisting their countries. Trump complained to Republican donors on Friday that Fed Chairman Jerome Powell hasn’t kept interest rates as low as he expected.

“We’re negotiating very powerfully and strongly with other nations. We’re going to win,” he said. “But during this period of time I should be given some help by the Fed. The other countries are accommodated.”