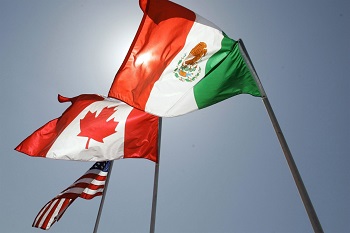 The US and Mexico are close to resolving their Nafta differences and may wrap up as soon as Monday, creating an opening for Canada to rejoin talks between countries that trade more than a trillion dollars annually.

As has been the case over a year of intense and sometimes fractious negotiations to update the decades-old North American Free Trade Agreement (Nafta), it’s not the end of the road. But optimism is running high on salvaging the pact that Trump has threatened to scrap.

Significant breakthroughs between Mexico and the US came during the past several days on automobiles and energy, according to three people familiar with the process who asked not to be named discussing private talks.

There is one bilateral difference left to iron out, Mexican Economy Minister Ildefonso Guajardo told reporters on Monday as he entered the Washington office of the US Trade Representative’s office where negotiations are going on. He declined to identify the issue.

Along with Canada, they’ve been negotiating for a year to overhaul the 24-year-old accord at the insistence of Donald Trump. The US president says the deal has led to hundreds of thousands of lost American jobs, and he promised to either change it to be more favorable to the US or withdraw.

The US push to finish Nafta talks comes at the same time it’s in a spiraling trade war with China, and has threatened to place tariffs on cars imported from major manufacturing centers in Asia and Europe -- efforts that have created new uncertainty for many businesses and investors.

Trump, the final arbiter on the terms of any deal struck by US Trade Representative Robert Lighthizer, said Saturday on Twitter that the US could have a “big Trade Agreement” with its southern neighbor soon, and praised the ability of Mexico’s outgoing and incoming governments to work together on the deal.

Companies operating across North America have worried that some of Trump’s demands could hurt the region’s economy, especially given the way supply chains and other inter-dependencies between the countries have developed. Mexico’s peso rallied on optimism that an agreement is at hand.

“The story of these types of things is always defined in the final minute, and I would say that we’re practically into the final hours of this negotiation,” Guajardo told reporters. “We’ll do everything possible to try to land a deal.”

Guajardo predicted that the US and Mexico would need at least a week of work to resolve issues with Canada whenever the nation is invited to rejoin the talks.

There were signs this weekend of progress on some of the most complicated issues. Jesus Seade, the Nafta representative for Mexican president-elect Andres Manuel Lopez Obrador, on Saturday predicted that the nations will agree on a softened version of a so-called “sunset clause,” an automatic expiration after five years -- a key US demand.

Guajardo has said repeatedly he expects the issue to be one of the last resolved once Canada returns to the talks. He’s proposed regular Nafta evaluations without the threat of any sudden death to the agreement.

The sunset clause is likely to see some type of compromise, said a US official who asked not to be named. The person added that work on bilateral issues with Mexico is almost entirely complete.

It remains unclear how US and Mexican negotiators would frame any announcement about the completion of work on their bilateral issues.

Guajardo has signaled that the nation won’t declare victory on Nafta until Canada also signs on.

The administrations of Trump and outgoing Mexican President Enrique Pena Nieto have been working for five weeks to resolve specific bilateral issues so Canada can rejoin the talks. The US and Mexico are pushing for an agreement this month that would give the countries time to sign the pact before Lopez Obrador takes office in December.

A Canadian official declined to comment and referred back to remarks from Prime Minister Justin Trudeau, who said last week he was encouraged by optimism coming from the US and Mexico but won’t sign just any deal.

On Saturday, Seade told reporters that the nations have resolved concerns that the deal had too many restrictions on how the next government can treat foreign oil companies investing in Mexico.

The US and Mexico in recent weeks had largely focused on the thorny issue of car manufacturing, as the Trump administration pushes for a deal aimed at boosting factory jobs in the US Washington has proposed tightening regional content requirements for car production and having a certain percentage of a car manufactured by higher-paid workers.

While a US proposal to increase tariffs on cars imported from Mexico that don’t meet new Nafta content rules has long been a sticking point, that issue appears to have been resolved.

The US agreed to keep the 2.5% tariff currently applied under World Trade Organization rules if the cars are made at factories that already exist, according to two people familiar with the plans, who asked not to be named discussing private negotiations.

That would leave open the possibility that cars that don’t meet the rules and are built at new plants could face tariffs of 20-25%, pending the results of a Section 232 national security investigation that Trump ordered in May, the people said.

While Trump has floated the idea of negotiating bilateral trade accords -- finalizing one with Mexico before moving to pursue a separate pact with Canada -- both Mexico and Canada have said they want to keep a three-nation deal.

The scope of what deal could be announced, or when Canada will rejoin is unclear. And several steps remain before any new Nafta would kick in. Among them:

Canada tags back in: One of the core Nafta fights has been on cars -- namely, low Mexican wages luring manufacturing jobs to the country. A breakthrough between the US and Mexico on wages would be a big development, but Canada would still have to agree on that and all other issues.

Mostly-Canadian things: The US-Mexico negotiations have been bilateral talks on how a three-way pact would look. But Canada and the US have their own issues, including dairy. The US wants to dismantle Canada’s dairy system, which is designed to avoid oversupply that’s something of a sacred political cow in the country. Trudeau has pledged he won’t abandon it entirely. Another core dispute is over Chapter 19 dispute panels, considered a deal-breaker for Canada, but which the US wants to eliminate.

US Congress and the mid-terms: A new Nafta deal will almost certainly be left to the new Congress to consider following mid-term elections in November. How those votes go will depend on who gets elected.

Other Tariffs: Hanging over talks are Trump’s other trade measures, including tariffs on steel and aluminum and threatened tariffs on vehicles and parts. While technically separate, Canada and Mexico are hoping to secure exemptions from these as part of any deal to revamp Nafta. Progress here remains unclear.

The Good News: Talks have been conducted under repeated threats by Trump to quit the accord. If Trump blesses a bilateral breakthrough with Mexico, it would be a sign that he won’t soon quit the existing deal -- ensuring some continuity and certainty for manufacturers, farmers and other sectors who rely on the pact.